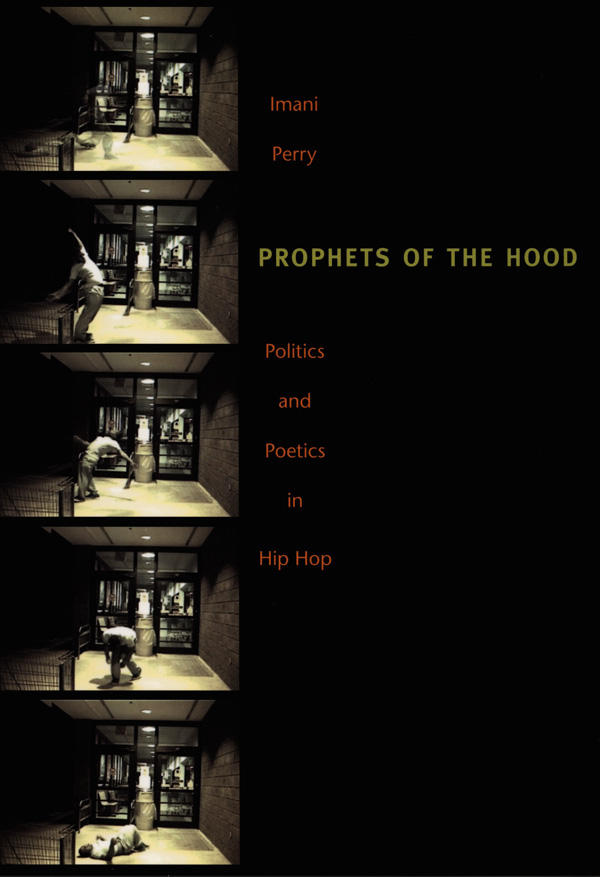 Prophets of the Hood: Politics and Poetics in Hip Hop

At once the most lucrative, popular, and culturally oppositional musical force in the United States, hip hop demands the kind of interpretation Imani Perry provides here: criticism engaged with this vibrant musical form on its own terms. A scholar and a fan, Perry considers the art, politics, and culture of hip hop through an analysis of song lyrics, the words of the prophets of the hood. Recognizing prevailing characterizations of hip hop as a transnational musical form, Perry advances a powerful argument that hip hop is first and foremost black American music. At the same time, she contends that many studies have shortchanged the aesthetic value of rap by attributing its form and content primarily to socioeconomic factors. Her innovative analysis revels in the artistry of hip hop, revealing it as an art of innovation, not deprivation.

Perry offers detailed readings of the lyrics of many hip hop artists, including Ice Cube, Public Enemy, De La Soul, krs-One, OutKast, Sean “Puffy” Combs, Tupac Shakur, Lil’ Kim, Biggie Smalls, Nas, Method Man, and Lauryn Hill. She focuses on the cultural foundations of the music and on the form and narrative features of the songs—the call and response, the reliance on the break, the use of metaphor, and the recurring figures of the trickster and the outlaw. Perry also provides complex considerations of hip hop’s association with crime, violence, and misogyny. She shows that while its message may be disconcerting, rap often expresses brilliant insights about existence in a society mired in difficult racial and gender politics. Hip hop, she suggests, airs a much wider, more troubling range of black experience than was projected during the civil rights era. It provides a unique public space where the sacred and the profane impulses within African American culture unite.