Read an Excerpt of ‘Street Players: Black Pulp Fiction and the Making of a Literary Underground’

The uncontested center of the black pulp fiction universe for more than four decades was the Los Angeles publisher Holloway House. From the late 1960s until it closed in 2008, Holloway House specialized in cheap paperbacks with page-turning narratives featuring black protagonists in crime stories, conspiracy thrillers, prison novels, and Westerns that gave readers an unfailing veneration of black masculinity. Zeroing in on Holloway House, Kinohi Nishikawa’s Street Players explores how this world of black pulp fiction was produced, received, and recreated over time and across different communities of readers.

Read on for an excerpt from the introduction of this exciting new look into the history and influence of black pulp fiction. 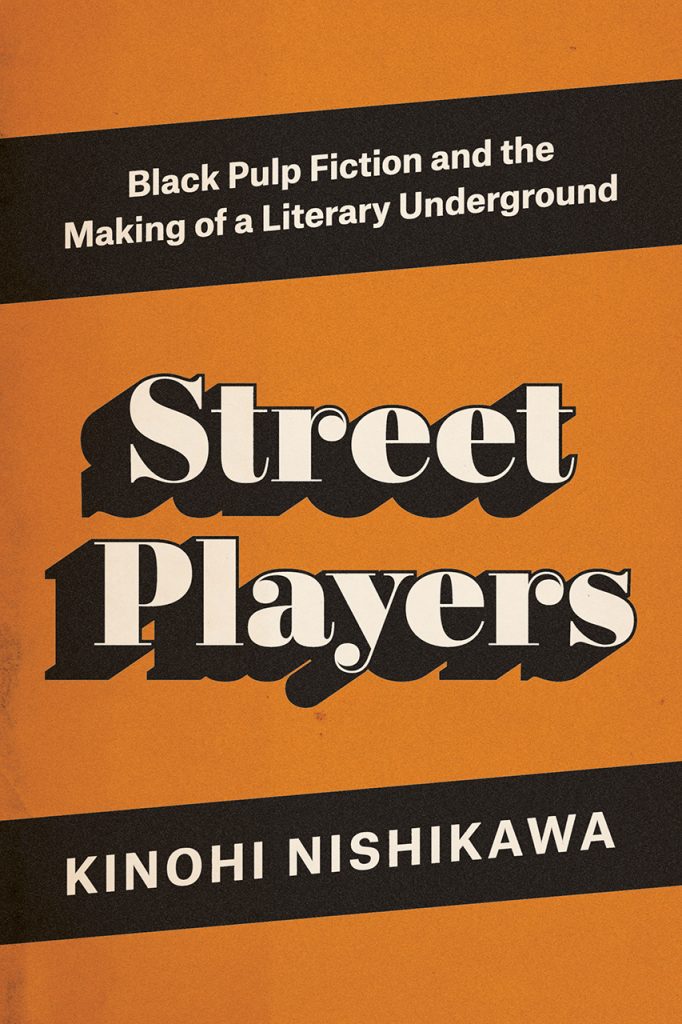 Irvine Welsh’s life changed after he found a copy of Pimp: The Story of My Life in a “used bookshop in Soho,” in London’s West End. Besides the title, what caught his attention was the author’s name. “How could you not pick up a book called Pimp written by a guy named Iceberg Slim?”1 he mused. The book did not disappoint. Originally published in 1967, Pimp was a coming- of- age story unlike any he had read. Abandoned by his father as a baby and left to his own devices by his mother as a kid, Slim recounted a boyhood spent on the streets of Milwaukee and Chicago, where paternal surrogates schooled him in the art of the hustle. He proved a quick study and made his way up the ranks of the underworld. In a time when black men in the North suffered the indignities of police harassment and employment discrimination, Slim became one of the most successful black pimps in the Midwest—a lothario to women and the envy of every other man. Slim had made a way out of no way and, despite the odds, had come out on top.

Hailing from a rough, working- class section of Edinburgh, Scotland, Welsh saw, and heard, aspects of his own life reflected in the pages of Pimp. For one, he could relate to “Slim’s view of the relationships of the black American ghetto, the hustling, scamming, pimping, drug- dealing, stealing, and rampant aspiration towards wealth”—in short, a world where it was every man for himself, and the trick was how to survive it. But he could also relate to Slim’s command of street language, its florid descriptions, acerbic barbs, and vulgar slang—a mode of communication that, though unique to the American ghetto, felt typical of all urban argots. Welsh was so taken with Pimp that reading it gave him “the confidence to write in [his] own voice.” And so he did, resulting in Trainspotting (1993), a best- selling novel about a dope addict who tries to extricate himself from Edinburgh’s blight while kicking the habit. The book, written partially in Scots dialect, was made into an internationally acclaimed film in 1996.

Slim had a similarly inspiring effect on a young black man, Tracy Marrow. After his parents died within four years of each other, Marrow moved across the country, from New Jersey to Los Angeles, to live with his aunt. It was there, in the enclave of South Central, that he was introduced to Iceberg Slim. “Ghetto hustlers in my neighborhood would talk this nasty dialect rich with imagery of sex and humor,” he recalls. “My buddies and I wanted to know where they picked it up, and they’d told us, ‘You better get into some of that Iceberg stuff!’” Slim’s reputation as an obscene wordsmith prevailed over the culture of Crenshaw Boulevard. But it was his work as a published writer (“that Iceberg stuff”) that provided the key to understanding this culture, a way to connect with older men in the community. Reading Slim was an initiation into their world.

Marrow continues, “We found the books, and we started passing them around to each other.” He and his friends devoured Slim throughout their high- school years, inculcating themselves into street culture in the process. Slim’s appeal, for them, was self- evident: “Here was a man that a lot of black kids could relate to because he spoke their language. The language of the ghetto. He wasn’t writing from the perspective of some brother who got outta the hood, but from the perspective of an insider.” In time, Marrow decided to adapt that perspective to his chosen art form: rap. He styled his emcee persona “by the same method” Slim had used in his writing—describing street life on its own terms, in its own argot. His career as a performer took off, and he has not looked back since. “I took my rap name in tribute to him,” says Marrow, better known as the gangsta icon Ice- T, “and I’ve never regretted it.”

Welsh and Ice- T were born in 1958. Reading Iceberg Slim was a transformative experience for both. But the differences in how these men—a white, working- class Scotsman and a black, working- class American— discovered and made use of Slim’s writing point to familiar problems in the study of black popular culture. Welsh came to Slim by accident, drawn in by Pimp’s sensationalistic packaging. Though he did not explicitly represent blackness inTrainspotting, Welsh did use Slim as a kind of “black mirror,” Eric Lott’s term for a “blackness imagined to be both other and intimate,” capable of helping whites learn more about themselves. On the flipside, Ice- T came to Slim as a matter of course: by word of mouth, and through a community of readers. Pimp was already part of the culture into which he entered and to which he would contribute his creative energy. Thus, when Ice- T adapted Slim’s writing into rap, it was not so much an act of cultural appropriation as a node in the process of cultural recirculation.

From the cakewalk to the Kardashians, Elvis to Eminem, white appropriation of black cultural forms is a recurring theme in modern social life. It explains the apparent irony that as our popular culture has become more representationally diverse, the structures sustaining racial inequality have remained intact. Greg Tate traces the origins of this dynamic to the slave trade, where the black body was offered up as “capitalism’s original commodity fetish.” Blacks’ “reduction from subjects to abstracted objects,” Tate argues, “made them seem larger than life and less than human at the same time”—an image perfectly suited to the project of appropriating blackness with one hand while condemning it with the other. When it comes to Irvine Welsh, bell hooks’s formulation of “eating the Other” would seem to be more germane. By consuming different cultures in the marketplace of commodities, white people, she posits, realize “all those ‘nasty’ unconscious fantasies and longings about contact with the Other [that are] embedded in the secret (not so secret) deep structure of white supremacy.” Put differently, whites want a “bit of the Other”—“working- class British slang,” hooks reminds us, for having sex with a person of color—but they do not want the basis for their social identity to be challenged by that encounter.

This book is centrally about race and appropriation in late twentieth-century popular culture. Parts of it dovetail with the points made above. But the broader story it has to tell moves beyond the binary oppositions—white versus black, fetishism versus self- possession, appropriation versus authenticity—on which these points rely. Before such distinctions can be drawn, we need to consider how the “Other” of white fascination is produced in the first place. The reason, I suggest, is that this “Other” is not always what it seems. For example, the appropriative processes I have been describing with regard to Irvine Welsh and Trainspotting apply equally to Iceberg Slim and Pimp. Far from a candid or truthful account of Slim’s life, Pimp was self- mythologizing fiction—a heady mixture of confession and bombast whose greatest trick was to convince readers that “Iceberg Slim” had been the author’s street moniker and not the nom de plume that it was. That trick may have established the author’s larger- than- life persona, but its raison d’être was to appeal to the prurient interests of whites. In fact, Slim’s literary career was made possible by the fact that his publisher wanted him to be a black mirror. Exactly how all of this happened, and what this story means for continued discussions of race and cultural appropriation, are the subjects of this book.

Street Players is available now! Find it on our website, online at any major booksellers, or your local bookstore. Kinohi Nishikawa is an Assistant Professor of English and African American studies at Princeton University. You can connect with the Professor Nishikawa on Twitter.

[via The Chicago Blog]

COVID-19: Coronavirus Information
Princeton University
Due to Covid-19 restrictions, the seminar rooms will be unavailable during the 2020-2021 academic year.
We Can Make America Anew Only If We're Honest About the Depth of the Ugliness and Hate Today
Eddie S. Glaude Jr., TIME
Broken though it may be, America is ours, and together we can make this place anew, if we are finally honest with ourselves about the ugliness that...
Tags:  AAS Faculty
The Bitter Fruits of Trump’s White-Power Presidency
Keeanga-Yamahtta Taylor, The New Yorker
The events of January 6th make clear a growing unity between the Republican Party and white supremacists.
Tags:  AAS Faculty
Begin Again: James Baldwin’s America and Its Urgent Lessons for Today – review
Ashish Ghadiali, The Guardian
The great writer’s passion and resilience resonate anew in Eddie S Glaude Jr’s timely, powerful study
Tags:  AAS Faculty
END_OF_DOCUMENT_TOKEN_TO_BE_REPLACED